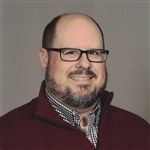 Originally from Pride, Matthew discovered LSMSA from a chaperone on a Junior Classical League trip. He met his best friends in the world at LSMSA, then abandoned them for Chicago, where he got a degree in accounting from DePaul University in 1997.
Four cold winters was enough, so he returned to Baton Rouge and attended LSU Law ('00), where he discovered three fellow gifties in his class. Because of his connections in Natchitoches, he was hired by a Third Circuit Court of Appeal judge in Many. He still lives in Many and works for the same judge nineteen years later. Matthew has served as President of the Sabine Parish Chamber of Commerce, the Chairman of the St. John Finance Council, the Grand Knight of Knights of Columbus Council 12061, and currently serves as President of the Many Lions Club.

"Being so near to LSMSA has given me a chance to watch it evolve over the years.  I'm proud of the administration, faculty, and staff who are committed to the students at my alma mater, and grateful for the chance to serve my fellow alumni."
Back

Louisiana School for Math, Science, and the Arts

Louisiana School for Math, Science, and the Arts (LSMSA) is the preeminent state-supported residential high school with competitive admissions for Louisiana's high-achieving, highly-motivated sophomores, juniors, and seniors. As a public school, there is no tuition to attend, and assistance from the LSMSA Foundation ensures the program is available to all qualifying students regardless of family financial need.
© 2018 LSMSA All Rights Reserved